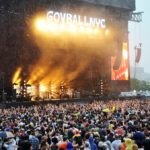 Governors Ball officially called it for 2020—a postponement of this summer’s events just isn’t in the cards according to festival organizers. Originally slated for June 5 – 7, the long-running multi-day NYC mainstay festival set out a notice on social media revealing this year’s total cancellation. Due to what will likely prove to be a backup of events rescheduling their weekends for fall and early winter dates, there simply won’t be enough calendar to go around, and some festivals will be forced to fold outright for the year.

While logistical and other planning issues are preventing an event from running later this year, Governors Ball organizers have assured fans they are already in the planning stages of what will be the festival’s 10th anniversary in 2021. Tame Impala, Flume, Miley Cyrus, and RÜFÜS DU SOL were among the acts slated to play the festival this year. Refunds and ticket exchanges will be available on the festival’s website.