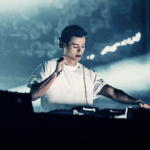 It’s only taken a pair of releases in the first few months of the year for Seth Hills to allege his standing as a definitive bright spot in the directory of STMPD RCRDS. After uncovering his inclusion in Martin Garrix‘s Tomorrowland New Year’s Eve performance in February, the Amsterdam tenant is extending the cycle of his sound’s everlasting progression as he rejoins Garrix’s imprint for the delivery of “Solitude” alongside MINU.

There’s only so many ways to restate just how unchallengeably gifted Seth Hills is. Introduced during both the label boss’ 341st radio mix and Hills’ outer space-located virtual stream from earlier in March, “Solitude” is another royal meeting between his refined crossbreed of bass house and vocal toplines that serve as the congruous cherries on top.