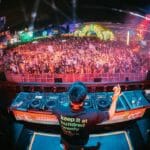 It’s been a fall to remember for Bleu Clair, who just wrapped up a well-earned debut campaign around North America. After making the rounds at EDC Las Vegas, Seismic Dance Event, and a handful of opening appearances for Habstrakt tossed in between, one of Dancing Astronaut‘s Artists to Watch in 2021 is celebrating crossing the touring finish line by adding to an already lengthy list of reasons as to why he deserved a nod to our annual class of deserving newcomers. For Bleu Clair’s milestone tenth delivery of the year, he partnered up alongside a fellow Jakarta-bred name in Teza Sumendra for a return to Insomniac Records with “Hyperspace.”

For those that have been fortunate enough to witness Bleu Clair behind the decks these past few months, his description of “Hyperspace” as his “favorite unreleased track so far” accurately falls in line with how we’ve all equally felt about it. Bleu Clair brings forth a deeper, more minimalist side to his tech-house sleight that he’s continually shown growth in, recruiting Sumendra for a soulful helping vocal hand on another show-stopping original to pile onto his 2021 resume.

Stream “Hyperspace” below and stay tuned for the looming release of his EDC Las Vegas set later this week.