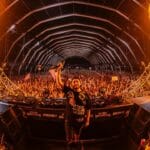 Fashioned with the expertise of a 48-piece orchestra and two conductors, the strings-led recasting taps into a deeper emotive layer of the Codeko and Casey Cook-aided outing. The orchestral companion to “Crazy” notably takes an audio-visual format, arriving in tandem with a video shot at Los Angeles’ EastWest Studios in the middle of the COVID-19 quarantine. The visual, available below, adds to the impact of Wooli’s debut EP on Ophelia Records.