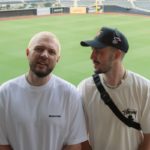 One might be surprised to learn that Chris Lake and Cloonee had yet to collaborate on a production—until May 13, that is. Following Cloonee’s remix of “Turn Off The Lights,” in January, the two United Kingdom producers have come together on “Nightmares,” out now via Black Book and Astralwerks records. “Nightmares” is Lake and Cloonee’s second original of 2022, respectively; it follows Lake’s March single, “400,” and Cloonee’s joint effort with Brisotti, “Tripasia,” released the same month.

“Nightmares” begins with an ominous ticking clock before a dark bassline and futuristic melody give way to brassy tones and sizzling kick-drums. A dark and intriguing single, “Nightmares” is comparable to a short version of a horror film’s soundtrack. The next opportunity to see both Chris Lake and Cloonee in concert together will be at Under Construction in Arizona on May 29. Dancing Astronaut and Relentless Beats have partnered to host a giveaway for the show; enter here for your chance to win.