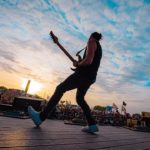 It’s been a little over eight years since Trivecta released his debut single, “One Night Only.” In the time since, he’s released hit singles like 2017’s “Shatterpoint,” remixed tracks for ILLENIUM and Dabin, and collaborated with artists like Seven Lions and Excision. But just as his career seemed to be hitting full stride, the COVID-19 quarantines sidelined him. For Trivecta, this wasn’t a setback, but rather, an opportunity.

The pandemic-related lockdowns proved a reset for many inside and outside of the music industry. The world’s metaphorical snow globe had been shaken, and all one could do was best position themself for when the snow finally settled—whenever that would be. What that looked like was different for everyone; for him, though, it entailed an album.

“I didn’t actually go into it thinking, ‘hey, I’m making an album,'” he recalled. “I was just kind of like sitting around in the studio and sketching little bits of DNA, even just 15-second clips of little ideas.” From there, The Way Back Up was born.

“Going into 2020, I was probably only about a year-and-a-half into playing shows. I had been mostly releasing music on the internet for the first five years or so of my career, so when everything went back to the internet for the pandemic, I was like, ‘man, everybody’s back on my playing field.’ So it was kind of like, ‘all right, let’s make use of this thing.’ So I was trying to engage with the fans, but also write a lot of music. That’s where the album came from,” Trivecta told Dancing Astronaut.

His debut LP touches on a multitude of different styles and genres. There’s the melodic bass that he came up on, progressive house, psytrance, “folk bass,” as he calls it, and even some dark techno. This eclecticism came from “just wanting to try different things creatively,” he says. The choice to do so was a natural but also a very purposeful one. By doing so, he wanted to sidestep what would have been easy: crafting an album entirely made up of melodic bass.

“When I zoomed out and took a look at the overall framework of the album, that’s where I was like, all right, it doesn’t really feel like the way forward right now to make an album that’s just a bunch of melodic bass tracks. That didn’t feel cool. It didn’t feel creative. It doesn’t feel forward-thinking. It felt a lot cooler to me to ground the album in that, because obviously that’s what I’m known for and that’s where a lot of my heart is, but also to try and find ways to try new things in there to make things feel fresh,” Trivecta explained.

Indeed, the full body of work feels just that.

“That was a really important thing to me while making this,” Trivecta added. “It’s got to feel fresh. Things have definitely gotten a bit stagnant in a lot of genres of EDM.”

The effort to evade stagnation was “scary at times,” because he didn’t want to exclude the members of his audience who’d come to know him from his melodic bass productions:

“I also didn’t want to put out an album where these fans go, ‘oh, what’s he doing here? Like what is all this? Where’s the guy I’ve come to know and love?’ It was definitely a challenge, making sure to balance all that. But I think it came out covering all those bases, and checking all those boxes.”

One of the bigger risks that Trivecta took was creating what might be an entirely new genre, “folk bass.” It can be heard loud and clear on tracks like “Sail Away” featuring Jay Mason.

“In the beginning of the pandemic, I was just really inspired by a lot of non-EDM kind of music, like indie-folk kind of stuff” he said. This led Trivecta to take inspiration from artists like Hayden Calnin out of Australia, and folk duo Amistat, who feature on “Silence.” When asked what prompted him to pursue such an unconventional union of genres, he elaborated,

“It came from a frustration with how similar everything was sounding, and that frustration pushed me to really embrace what I was listening to. That bit of inspiration combined with a good bit of bravery pushed me to start looking forward and thinking, ‘how am I gonna start paving a path that doesn’t exist?’ It takes a long time to get the hang of making something like bass music, but once you really start to get the hang of it, eventually it’s like, ‘congratulations, you sound like two or three of the biggest artists in a lot of ways.’ You’re not going to do what they do any better than them, so now what are you going to do? It’s easier to mimic what other guys are doing, but the challenge is to ask how do you take what it is that you’re inspired by and find ways to combine that with what it is that you’re already doing?”

However expectedly or unexpectedly, this sonic collision of folk and bass works. It’s a testament to the level of pride that Trivecta takes in what he does, his passion for both genres of music, and his will to venture beyond what’s both customary and popular.

While tracks like “Open Road” and “Back To The Start” give shape to what this “folk bass” style sounds like, others have elements of other genres. “Horizon Lines,” for instance, has trappings of drum ‘n’ bass while “The Gallows” features dark techno. And of course, there’s gestures to his signature melodic bass sound throughout.

“Empty Oceans” featuring Matluck is one ofThe Way Back Home‘s standout inclusions—and Trivecta knows it. “This is going to be the big one,” he said of the song in an Instagram post. And although an album isn’t defined by one song, the progressive house anthem has already been a high point of his live shows in the run up to its official release.

“It’s hard to know sometimes because you begin to hate everything you’re working on by the time you’re done. And then, as time passes, you learn to love it again when you start sharing it with people and experiencing it live with a crowd,” Trivecta said when asked how and when he knows that a track is a “big one.” “For example,” he elaborated, “with ‘Empty Oceans,’ I was sick of it by the time I was done working on it. But I remembered what it felt like to get goosebumps working on that first section and building it out. So it’s hard to know. It was hard to know with that one if it was going to be something where people are going to be like, oh, well, this is more basic, more traditional and it doesn’t really take enough risks. But the average consumer isn’t thinking about that kind of thing. It’s more that as I’ve been sharing the album with people and getting a sense for how people respond to it, I’ve realized that, yeah, this feels like ‘it.'”

Fittingly, Trivecta’s album comes out on the imprint that he’s become so synonymous with, Dancing Astronaut‘s 2021 Label of the Year, Ophelia Records. He’s been on the label since his iconic melodic-dubstep collaboration—”Island” with Seven Lions and Wooli featuring Nevve— came out in 2019. Since then, he’s been a staple of Ophelia’s artist roster, both through releases and live shows, including the label’s Pantheon tour and various showcases. Working with Ophelia has been an “absolute dream” says Trivecta, who adds, “I’ve felt nothing but at home with this label and with these people, they’ve become not only my best friends in music, but some of my best friends in the world.”

Outside of Seven Lions, there is perhaps no artist on Ophelia who has helped to propel the label since its infancy more than Trivecta himself. And Ophelia has had a profound impact on him, as well. Part of the reason that he was able to take so many risks on The Way Back Up is because he “feels so creatively empowered,” “like [he] can do what [he] want[s] and feel[s] encouraged to do that,” on Ophelia without having to “make music that fits in in a certain bubble.” When asked specifically about the impact that Seven Lions has had on his career, Trivecta reflected,

“Jeff [Seven Lions] is a great person to work alongside whether it’s working on a collaboration or doing something on my own like the album. He’s like LeBron James; he can like lift you up creatively without trying to because he puts so much work into what he does and because he is so good at what he does. It inspires people around him to want to do the same and push themselves to the next level.”

When talking about the aforementioned Pantheon tour that Trivecta embarked on with Seven Lions and others in 2021, he recalled just how “open-minded” Ophelia’s fan base is: “I feel like I can get away with so much because there’s so much music that comes out on the label.” But with the Pantheon tour in the rearview, and his debut album in the foreground, Trivecta has set his sights on something else: his first-ever headlining tour.

The Way Back Up tour has stops in Los Angeles, New York, and his hometown of Tampa, to name just a few. Putting on a headlining tour in tandem with his debut album has been “one of the most challenging things” he’s ever done, but by his own admission, he’s “definitely up for the challenge.” “I’m really looking forward to being able to set my own rules for the shows and make my own show, and it’s exciting to have a fan base that is pretty much just there for me,” he says. To him, this means that he “can take more risks” and doesn’t have “to worry about appeasing people who might be there for other reasons.”

As far as working on his guitar skills goes? The guitar aspect of his shows will “definitely have some more cool live elements, with different ways of working it in that fans haven’t seen before.” In short, there’s going to be “a lot of new creative guitar moments,” he says.

When asked about his rockstar-like ability to command a crowd with his stage presence, especially with a guitar in his hands, Trivecta said he’ll always credit Cam, ILLENIUM’s sound guy, for yelling at him from the front of the house while he on tour with ILLENIUM in 2018. “He was like, ‘Sam, you’ve got to move your body up there. You can’t just stand still like a statue playing the thing,'” Trivecta said. Although weaving the guitar into his sets was a learning curve at first, over time, he’s gotten more comfortable with it. It shows, and it will continue to, city across city, as Trivecta puts shoes to pavement for a career benchmark: The Way Back Up‘s supporting tour.

Trivecta’s debut album is now streaming everywhere, courtesy of Ophelia Records. A complete list of The Way Back Up tour dates and ticket information is available here.

This interview has been edited for clarity and readability.

The post Trivecta maps out ‘The Way Back Up’ on Ophelia Records-backed debut album [Interview] appeared first on Dancing Astronaut.