Krewella Experiment With Hardstyle On ‘No Control’ 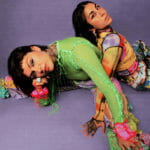 The Krewella comeback continues, this time harder and faster than ever before. The sisters team up with LA-based bass phenom MADGRRL for a raucous hardstyle hitter aptly named “No Control.” A far cry away from the emotive deep house and pop on “Never Been Hurt,” this one establishes a take no prisoners style from the start. Built on the foundation of boisterous bit of Melbournce bounce and frenetic hardstyle influence, the sisters and their newfound collaborator create a rhytmic yet chaotic experience that truly lives up to its name. One of the hardest hitting singles ever released by Krewella, “No Control” is a battle cry for the chaos we’ve all been craving for over a decade since they burst onto the scene.

“It’s been years since we’ve made a track like this – dipping into our career-long love of hardstyle and heavy bass music, we wrote and produced this song to articulate the burgeoning chaos we’ve been craving since having a lack of human contact and indulgent experiences during the pandemic. We tapped MADGRRL, whom we’ve known for almost 10 years, and has been making some of our favorite heavy dance tracks lately to help take this one to another level of wild.” – Krewella

The post Krewella Experiment With Hardstyle On ‘No Control’ appeared first on Dancing Astronaut.